November 22-30: Pompey Have a Ball in Golden Jubilee Game 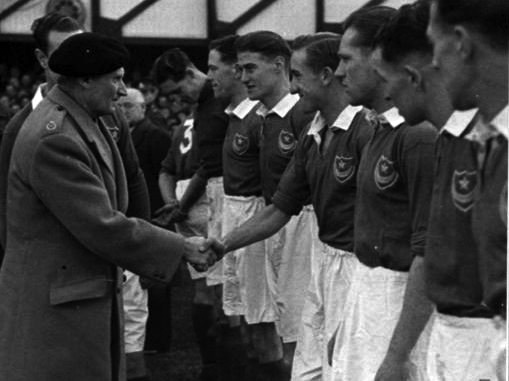 Pompey will need to be at their best to beat The Arsenal and end a run of five matches without a win. The poor run has seen the Blues knocked off the top of the first division table. They currently sit in third place behind Derby and Newcastle.

Another huge crowd is expected at Fratton Park for the Golden Jubilee match, but council delays in issuing essential paperwork mean that the ground's new 52,000 capacity will not be reached.

Club President Viscount Montgomery of Alamein will be attending tomorrow's big match, and the teams will be presented to him before kick off.

There will also be a parade of dozens of former players before kick-off tomorrow, including one or two who played in Pompey's very first match 50 years ago.

It is understood that Mr Jack Tinn, Pompey manager from 1927 to 1947, will not be in attendance tomorrow, although the reasons for his absence are not known. Mr Tinn led the club to three FA Cup finals, including the great Wembley triumph in 1939.

Pompey directors have made a point of acknowledging the club's roots by engaging the band of the Royal Artillery to entertain the crowd before kick-off and at half time tomorrow.

Pompey Reserves are without a Combination League fixture tomorrow, but they will travel to Guildford City to face the Southern League club in a friendly.

Saturday 27: There are 40 mins until kick-off in Pompey’s Golden Jubilee match against The Arsenal but Fratton Park is already looking quite full. Sizeable queues had formed at the turnstiles by breakfast time, the first supporters having arrived at 2.40am!

Dozens of former players have been entertained to lunch at the Sandringham Hotel, and they are to be introduced to the crowd. They include Matt Reilly, Harry Stringfellow, Nobby Clarke, Ted Turner and Billy Smith from the very first Pompey team.

Tonight there will be a civic reception for the club at the Rock Gardens Pavilion. Southsea. Tomorrow morning there is a special service at Portsmouth Cathedral, where there will be a reading by Pompey captain Reg Flewin.

The weekend's Golden Jubilee celebrations will conclude with a grand banquet and cabaret for 500 guests at the Savoy Hotel on Monday night.

The Portsmouth Evening News has produced a special pre-match edition (right) of the paper for today's big Golden Jubilee clash with The Arsenal.

The pre-match atmosphere has just reached a crescendo as the entire crowd sways to-and-fro, booming out the Pompey Chimes accompanied by band of the Royal Artillery!

Pompey produced a scintillating display of attacking football – probably their best since the war – to sweep aside a star-studded Arsenal side and win 4-1 in the Golden Jubilee fixture at Fratton Park this afternoon.

Froggatt and Clarke scored the goals that put Pompey 2-0 up after just 12 minutes and send the 43,000 crowd wild with excitement. Phillips and Barlow added further goals in the second half, either side of Lewis’s penalty for The Arsenal

The brilliance and speed of Pompey’s football was irresistible. This comprehensive victory moves them ahead of Newcastle into second place in the Division One table. Derby County remain top, two points ahead of Pompey.

There will be some relief that Fratton Park escaped the worst excesses of today’s weather. Six league and cup matches were postponed this afternoon and another five had to be abandoned, most of them in southern England. See all the results in tonight's Football Mail.

Monday 29: We hear there may soon be some easing of the regulations, introduced in 1940, covering the supply and use of newsprint. Hopefully the Football Mail will become more readily available. Here's Saturday's edition. and what a story it tells!

Tuesday 30: The Portsmouth FC Golden Jubilee thanksgiving service was held at a packed cathedral in Old Portsmouth on Sunday. The Provost of Portsmouth, the Very Rev E N Porter Goff, conducted the service.

Before the service at Portsmouth Cathedral on Sunday the club flag was handed by Pompey Vice-Chairman Mr J S Chinneck to the Provost, who placed it on the high alter of the Cathedral. The lesson was read by Pompey's city-born captain, Reg Flewin.

In his address the Provost said that when Pompey played at home they attracted more people than could be accommodated by all the churches in Portsmouth. He added that the club encouraged an important sense of local loyalty.

Wishing the club "good luck for another 50 years" the Provost appealed to sportsmen to apply their knowledge and discipline - requisite of a winning side - in the fight for good against evil on the world stage.

In other news, Pompey's visit to Manchester United later this season will be the last time the clubs will meet at Maine Road. Manchester City, who have been hosting United's home matches whilst Old Trafford is repaired, have given their neighbours notice to quit.